Lovely Review in the Vancouver Sun! 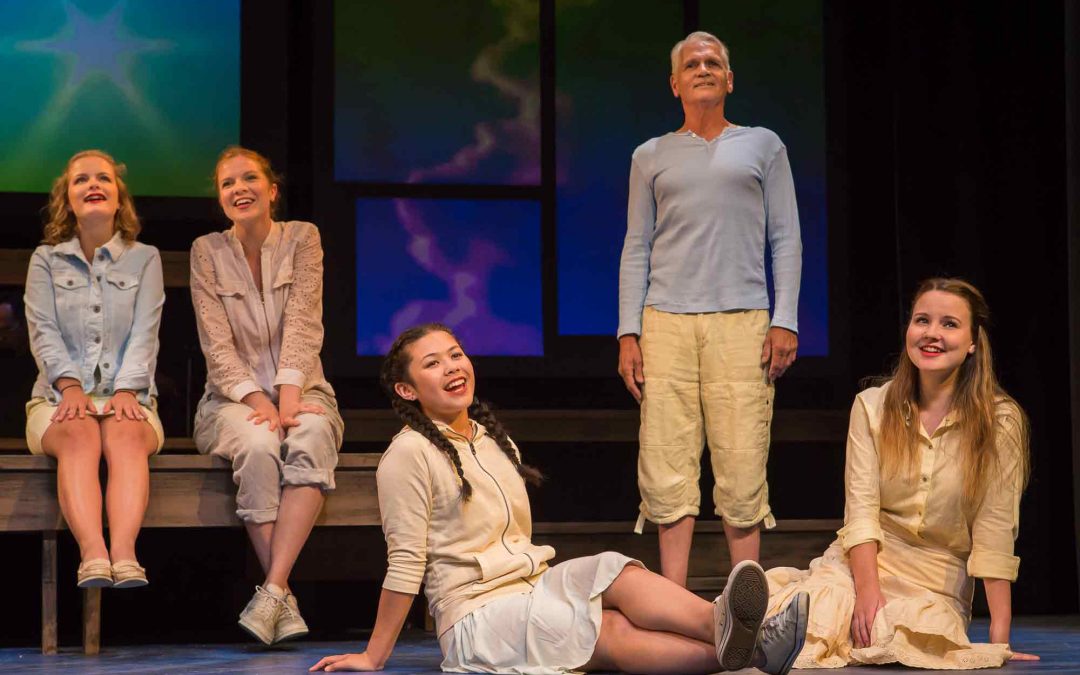 Tickets and info: $13-$27 at peninsulaproductions.org

The complex of municipalities traditionally known as the Lower Mainland and now officially called Metro Vancouver can sometimes seem like one giant, undifferentiated traffic jam or real estate scam. It’s useful to remember that each component of this megalopolis has its own history and civic identity.

The small seaside city of White Rock, with the help of Canada 150 funding, has chosen to tell some of its stories theatrically.
Sea of Stories, scripted by Shawn Macdonald and directed by Wendy Bollard, is a low-key musical pageant intertwining Aboriginal and settler histories of White Rock with a contemporary family play. Some of the in-jokes are obviously aimed at the locals. But as a come-from-away non-White Rockian (non-White Rocker?), I found much of it enjoyably entertaining and informative.

The sea god X’ya:s the Transformer (Sam Bob) looms over the proceedings and provides the original creation tale. He recounts how the Semiahmoo people came to be (via his marriage with a Cowichan princess), and how the great white rock that gave the area its settler name came to be there (he threw it in anger).

When Jeffrey gets a social-studies assignment to research local history, the play flashes back to 1914 when politician Henry T. Thrift (Cory Haas) led the movement to incorporate the city and build the White Rock Pier, and to 1957, the year White Rock was finally incorporated.
From left, Kirsten Kwong, Anthony Goncharov, Jessie Chan, Miranda Gilbert and Cory Haas are featured in Sea of Stories, which runs until Aug. 26 at Coast Capital Playhouse in White Rock. BEVERLY MALCOM / PNG
Thrift dreamed big. He imagined White Rock becoming a major port, “the Naples of the Pacific coast.” He’s also the subject of a sweet little 1914 traffic joke when his wife (Paige Gibbs) matter-of-factly comments that his Cloverdale meeting will be over at three so he should be home by 6:30.

The 1957 plot revolves around teenage Ellen (Kirsten Kwong), her friend (Miranda Gilbert) and sister (Jessie Chan), who talk about diving off the pier and almost seeing Elvis. But its most memorable line belongs to an adult who warns that the tax base is too small for the city to go it alone, so “White Rock is going to come crawling back to Surrey in a few years begging for forgiveness.”

Jeffrey’s assignment eventually connects him with X’ya:s, who helps Jeffrey eloquently detail the history of wrongs suffered by the Semiahmoo people to the present day. It’s a strong corrective and nice contrast to the lighter tone of the piece.

That tone is sustained in part through musical interludes. The standouts are a funny song about the ongoing arguments between developers and preservationists, and a lively number about Peace Arch Hospital, with choreography by Keri Minty. Composer and musical director Dominik Heins provides some tasty piano licks, with Mireille Perez on bass and Adam Van Loo soloing on sax.

Alan Brodie’s kaleidoscopic projections create a handsome visual backdrop of White Rock history and geography to complement the Sea of Stories enacted on the stage.